Celebrating 70 years since the creation of the European Union

9 May is usually the date when EU institutions, agencies and other bodies open their doors to the public and organise festivities in many European cities to celebrate the birth of the European Union with the Schuman Declaration. Although the coronavirus pandemic has made such activities impossible this year, the EU translation services have still joined efforts to find a way to mark this important founding event.

On 9 May 1950, the French foreign minister Robert Schuman made an appeal for the creation of a European Coal and Steel Community that would bring nations to work together. Some of his words in what is known as the Schuman Declaration still resonate today: ŌĆśWorld peace cannot be safeguarded without the making of creative efforts proportionate to the dangers which threaten itŌĆÖ.

In times of crisis such as the one we are currently experiencing, it is important that we ŌĆśstand togetherŌĆÖ, as the European Commission's president Ms von der Leyen rightly says. We do indeed need to make creative efforts and also think about and recognise the achievements, as well as the added value, that the European Union has brought about.

One such achievement is that the EU has united people of different cultural and linguistic backgrounds, which has largely been made possible through the EU's multilingual policy. There are 24 official languages in the Union today, and a great number and variety of texts are regularly translated into all of them, thus giving EU citizens access to important information and facilitating communication. That this can take place is thanks to the various translation services of the EU administration, i.e. the European Parliament, the European Council/the Council of the EU, the European Commission, the Court of Justice, the European Central Bank, the European Court of Auditors, the European Economic and Social Committee, the European Committee of the Regions, the European Investment Bank and the Translation Centre.

To celebrate ŌĆō online this year ŌĆō both Europe Day and the enormous value of multilingualism together, a video has been produced by the Translation Centre on behalf of the EU translation services. It talks of the beginning of the Union, and the gradual increase in the number of official EU languages in line with successive enlargements. The video illustrates what Robert Schuman said in his declaration: ŌĆśEurope will not be made all at once, or according to a single plan. It will be built through concrete achievements which first create a de facto solidarityŌĆÖ. 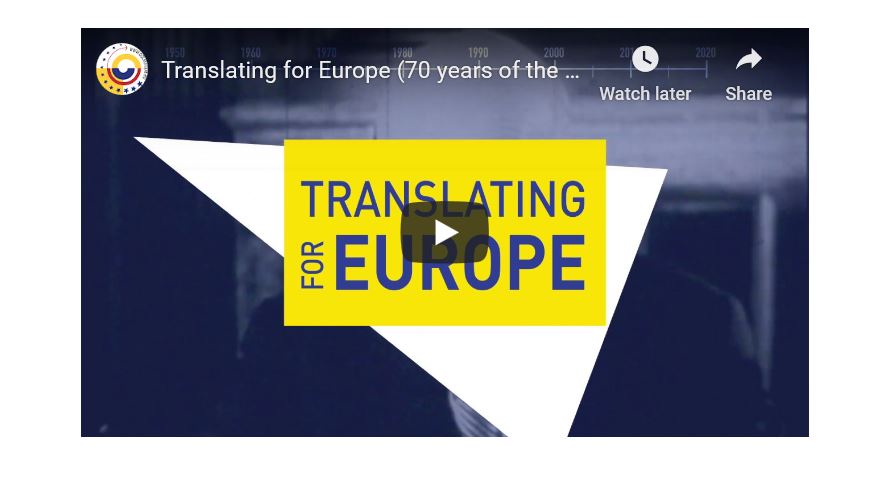 This video has also been made available on the platform launched by the European Commission's Representation in Luxembourg to mark this year's Europe Day. We hope you enjoy it and we wish everyone a ŌĆśHappy Europe DayŌĆÖ in all the official EU languages.