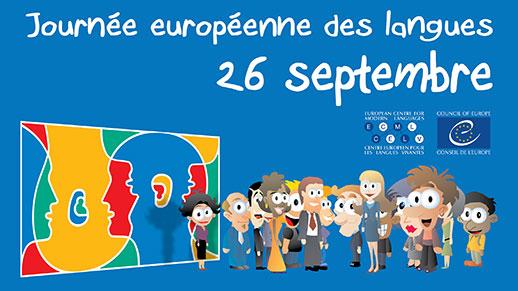 On 26 September every year, the Council of Europe celebrates the European Day of Languages (EDL) to promote language learning and preserve the linguistic richness of our continent.

Body
This initiative dates back to 2001, when the Council organised the European Year of Languages for the first time. At the launch in 2001, the Secretary General of the Council of Europe and the European Commissioner for Education and Culture declared in a joint statement that ‘everybody deserves the chance to benefit from the cultural and economic advantages language skills can bring. Learning languages also helps to develop tolerance and understanding between people from different linguistic and cultural backgrounds’. It is in this spirit that, year after year, events have been organised for the European Day of Languages. This year, due to the COVID-19 crisis, celebrations will be taking place online, and will include the following initiatives: The European Commission will hold an online conference on 28 September from 10:00 until 12:00 (registration required by 24 September at the latest), during which guest speakers will discuss the role of language skills in the context of the European Education Area. They will also analyse how to boost foreign language learning and incorporate language diversity and support literacy in all languages in schools. The European Commission’s Directorate-General for Translation (DGT) is running a campaign on social media throughout the month of September to promote the translation profession. The key messages are that we can find translation all around us, that professional translators can be a means of boosting business, and that translation is a modern, highly developed profession that offers plenty of potential for students and young people. The social media accounts used for this campaign are: facebook.com/TranslatingForEurope, facebook.com/translatores, twitter.com/translatores, instagram.com/translatingforeurope, youtube.com/DGTranslation. On 26 September, the European Parliament is organising its Multilingualism Day, offering virtual workshops (prior registration on a ‘first come, first served’ basis is required) on various topics such as ‘A day in the life of a translator and an interpreter’, ‘How do I become a translator or an interpreter?, ‘Translation traineeships’ and ‘How technology is changing the roles and ways of working of translators and interpreters’. For a bit of fun, have a look at the ‘Secret agent’s handbook of language challenges’ designed by the Council of Europe. It contains 51 challenges that encourage language learners to take risks and any opportunities they have to practise a language they are learning outside the classroom. At the Translation Centre, our main purpose being to respond to the translation and language-related needs of the EU agencies, we are fully behind the celebration of the European Day of Languages. It is an initiative that serves to remind us every year that one of the European Union’s key assets is cultural and linguistic diversity.