Development and sharing of terminology in the energy field 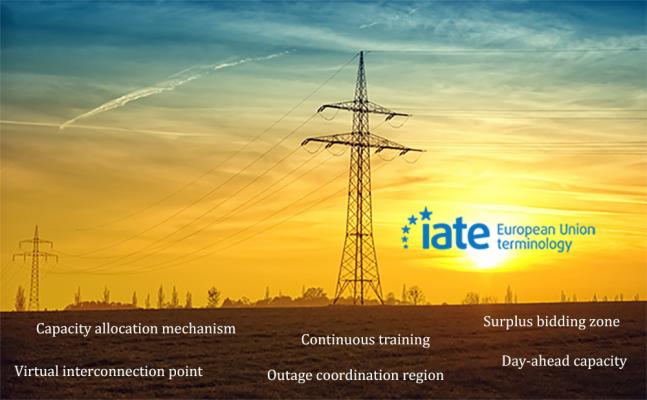 The Translation Centre is taking part in the initiative launched the European Union Agency for the Cooperation of Energy Regulators (ACER) to create and share key terminology in the energy field. Almost 600 entries are already available in English and German in IATE, the EU interinstitutional terminology database. Work is ongoing to enrich these entries with equivalents in other EU languages.

ACER, based in Ljubljana, Slovenia, is the EU Agency responsible for the integration and completion of the European Internal Energy Market for electricity and natural gas. Last year, it initiated a cooperation project with the Translation Centre for the purpose of developing core terminology in the field of energy policy in the EU languages and making it available in IATE, the EU interinstitutional terminology database.

The advantage of developing multilingual collections that include key terms is that it facilitates the standardisation of terminology, especially when these collections are freely accessible to all (subject-field experts, policymakers, authors, linguists, etc.) through a platform such as IATE.

To start the project, terminologists at eControl (the Austrian Energy Regulator) and the Translation Centre used the bilingual English-German glossary developed by eControl containing over 800 technical terms extracted mainly from Austrian and EU legislation (see Bilingual glossary - https://www.e-control.at). After a process of exchange of information and intensive duplicate detection and documentation work, the terminologists prepared a duplicate-free collection of terms in IATE, fully documented to comply with the rules of the interinstitutional terminology database.

This cooperation resulted in around 300 new entries being imported into IATE and another 300 existing IATE entries enriched. These 600 terms can be found in the collection ‘ACER-MUL-Energy_Regulators_core_terms’, which can be accessed through the IATE search engine: https://iate.europa.eu/search/collections.

During this process, the Centre provided guidance and advice on managing multilingual terminological data. On this basis, a methodology was put in place by the terminologists at the Austrian Energy Regulator to help create similar collections of core terms in the energy field in the other EU languages.

Other national regulatory authorities have joined in the effort and are working on the same key terminology in their languages. Some are also cooperating with terminologists from EU institutions (the European Commission, the European Parliament and the Council of the European Union).

The Centre welcomes such initiatives from subject-field experts. They expand the collections of fully documented terminology available to all stakeholders, enabling everyone to speak with one voice and to get messages across efficiently.