Irish gains full status as an official language of the EU 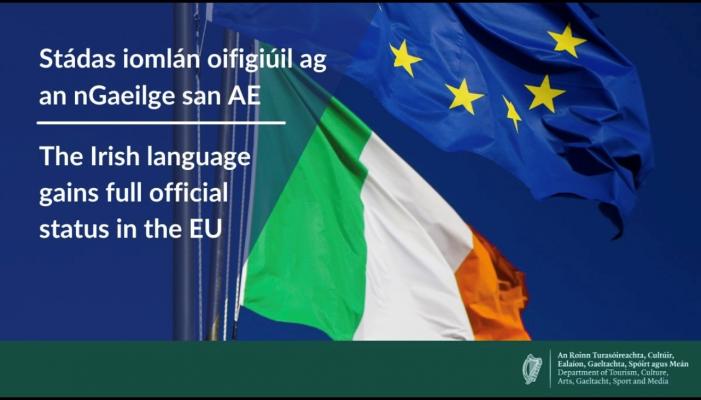 Image: Government of Ireland, Department of Tourism, Culture, Arts, Gaeltacht, Sport and Media
On 1 January 2022, the Irish language gained full status as an official language of the European Union. This means that Irish will have equal status with the other 23 official languages of the EU.
Body

Irish has been a Treaty language since 1973, the year of Ireland's accession to the EU, which meant that only the EU treaties were translated into Irish. In 2007, at Ireland's request, Irish became an official and working language of the EU. However, due to a shortage of translation staff and limited Irish language technological resources, under a special derogation granted by the Council, the number of documents to be translated into Irish would be limited.

The date of 1 January 2022 also marks the end of the derogation that has been in place since 2007. This has gradually been phased out since 2015, as the capacity for translation into Irish within the various EU institutions and bodies has increased. As a full official language of the EU, all documents published by the EU will be translated into Irish.

Like all EU institutions, the Translation Centre has undergone thorough preparations to respond to its clients’ increasing demands for translation into Irish.

To this end, and in order to ensure a sustainable service moving forward, the Centre has enlarged its in-house Irish language team and has taken the necessary steps to establish a full team for Irish, with plans to recruit additional translators for Irish in 2022.

These measures, along those in the areas of outsourcing and building up language resources into Irish (e.g. the LEX/IATE, Fiontar & Scoil na Gaeilge, Dublin City University terminology project), will strengthen the presence of Irish as an official language of the EU with full status, as part of EU’s multilingual policy.