A well-deserved retirement for Benoît Vitale 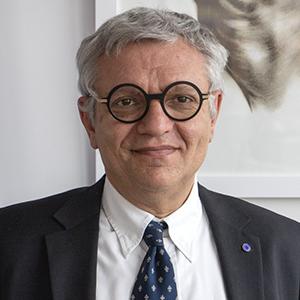 Benoît Vitale
As the month of January comes to a close, Benoît Vitale, our Acting Director, is packing his bags to embark on his retirement after 20 years of service at the Translation Centre. Dr Ildikó Horváth (currently Associate Professor in International Affairs at the University of Eötvös Loránd in Budapest) will replace him as the Centre’s director as of 1 February 2022.
Body

Benoît Vitale will have left his mark on the Centre through his visionary and pragmatic spirit. In these last years, he has skilfully overseen the implementation of the Centre’s transformation plan (see Highlights of the year 2020, p. 6-7) and other ambitious projects such as the in-house development of eCdT, our translation workflow platform. With his drive and support, not only has the offer of services been extended, but also new technologies added, such as machine translation and voice recognition. ‘Together we have managed to achieve our goals’, he stressed on seeing the energy invested by so many in transforming the Centre.

A committed European, he has made every effort to ensure that we can continue our mission, namely to help our clients – EU agencies and institutions – communicate with citizens across the EU in their own language. Multilingualism is an integral part of the European Union project and a major pillar of our democracies to be defended and promoted.

Benoît Vitale was head of the IT department for more than 13 years, after which he became Director ad interim (in 2015) and Acting Director from January 2019. In 2001, he was appointed as Data Protection Officer, a role in which he was a true pioneer as he was the very first DPO in the network of European agencies to perform this function. In 2009, he set up the General Affairs Department which he managed for one year. That department was composed of two new teams, namely, the Project Management Office and the External Relations and Communication Section.

As an IT engineer, the performance and sustainability of the IT services have always been a key concern of his. Thus, from the first day of lockdown in March 2020, the Centre’s staff were fully operational as a result of the IT environment that had been prepared for a crisis that could potentially require teleworking.

The COVID-19 crisis confirmed Benoît Vitale’s real human touch. Through his bulletin ‘L’Info du Dirlo’, launched in the middle of the pandemic, he kept the Centre’s staff informed and motivated when most of them were working from home. Many of the staff were grateful for this initiative and for his online staff meetings to keep staff morale high.

All will change for Benoît Vitale come early February. Or perhaps not. His many areas of interest will undoubtedly see him before long at the forefront of more multifarious adventures. Let’s not forget that one of his favourite quotes is ‘if we want things to stay as they are, things will have to change’, by Giuseppe Tomasi di Lampedusa.