The EU celebrates diversity and inclusion in May 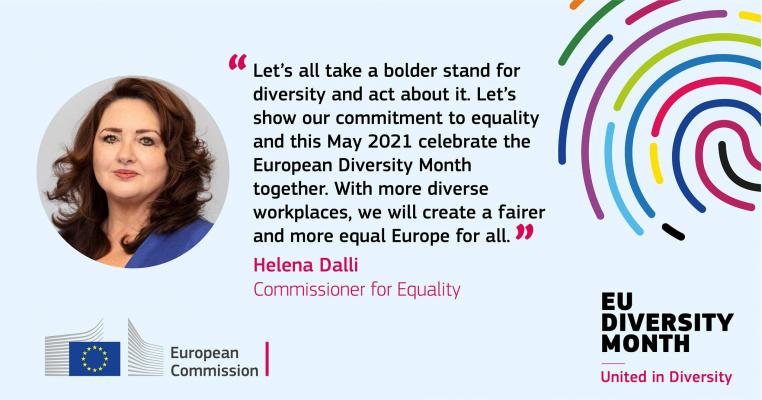 17 May has been celebrated round the world since 2005 as the International Day Against Homophobia, Transphobia and Biphobia. To further promote inclusion, the European Commission has declared May as the European Diversity Month, and the EU Agencies Network has launched a number of specific initiatives for 2021.

The International Day Against Homophobia, Transphobia and Biphobia aims to celebrate sexual and gender diversity, and to campaign against the violence and discrimination experienced by LGBTIQ+ people internationally. This year's theme of 'Together: Resisting, Supporting, Healing' was chosen in the context of the events and struggles of the past year and has been approved by a large group of international and regional LGBTQI+ networks.

For many years the EU has worked tirelessly towards providing a legal framework that could be transposed into national laws. In addition, it continuously supports proposals from national governments, civil society organisations and the private sector for promoting inclusive initiatives that put an end to exclusion, discrimination and violence against LGBTI people. However, as shown in the European Union Agency for Fundamental Rights (FRA) report based on the latest survey conducted in 2019 in the EU, 19% of lesbian, gay and bisexual people, 35% of trans people and 32% of intersex people felt discriminated against at work. Additionally, 46% of LGBTI people admitted that they did not reveal their LGBTI status to medical staff or healthcare providers.

Celebrating the International Day Against Homophobia, Transphobia and Biphobia raises awareness of new challenges, including some created by COVID-19, that have led to an increase in existing inequalities.

The International Day Against Homophobia, Transphobia and Biphobia in May will not be the only celebration in the EU, as the Commission has declared May as the European Diversity Month to celebrate diversity and inclusion in Europe.

Raising awareness about the importance of promoting and implementing actions and policies in favour of diversity and inclusion in the EU, and encouraging NGOs, public bodies and private companies to offer equal opportunities in the workplace and in society is the double aim of celebrating the European Diversity Month.

These celebrations also serve to remind us that equal treatment is a fundamental right in the EU. Moreover, it is illegal to discriminate against a person on the basis of age, disability, gender, race, religion or sexual orientation. However, only one third of EU citizens are fully aware that they are legally protected against any kind of discrimination.

In order to contribute to a change and make our organisations more inclusive, the Working Group on Diversity and Inclusion within the EU Agencies Network, in which the Centre is represented, has developed various initiatives such as the Charter on Diversity and Inclusion and an Action Plan. The plan contains actions for European agencies and joint undertakings to select from and implement, not only during the European Diversity Month but throughout the year.

Let’s celebrate the International Day Against Homophobia, Transphobia and Biphobia and the European Diversity Month! Even better, let’s celebrate diversity and inclusion in Europe every day!